On November 22, 2016, Sebastian Schutte published an article in the Washington Post entitled: “Trump/Hitler comparisons are overstated. How did Hitler actually consolidate power?”. This article, written shortly after the election of our 45th President, came on the heels of many within the media comparing the rhetoric of Donald Trump to that of Adolph Hitler.  Schutte, himself a German, felt a sense of nationalistic hubris in pointing out that those who criticize should not do so in haste. He listed several points in which to date (Nov. 22 2016), Mr. Trump had not mirrored his Nazi counterpart. However, he warned that, unless careful attention was paid to the words and actions of our Commander in Chief, history could repeat itself. It appears that, as of today’s proclamation that Transgender soldiers may no longer serve in the US Military in any capacity, our nation has crossed the proverbial Rubicon and we must seriously look at the possibility of history being re-played out on our own shores against our own citizens. Schutte’s article laid out the following guidelines stating: “For the Trump-Hitler comparison to hold, the Trump administration would have to consolidate its power as the Nazis did starting in 1933. Nazi policies concentrated on building a cohesive national majority, to unite “ethnic” Germans against Jews, foreigners, homosexuals, political critics and other minority groups. The contemporary analogy would be Trump actively pitting white Christian America against minorities in the years ahead.”


According to Schutte, the Nazis used at least four tools to accomplish their goals. Revisiting these four tools seven months into the Trump Presidency are eerily apocalyptic and lay out a scenario that this world has already witnessed a mere 80+ years ago.


Scapegoating was a Nazi maneuver to blame minority groups for policy failures and the weak economy. Trump has blamed foreigners and minorities for taking away jobs and killing Americans, but we need to see if this rhetoric from the campaign trail continues once he takes office. – Donald Trump has gone out of his way to develop a “list” of individuals (President Obama, Democrats, Moderate Republicans), cultural groups (Latino, Gay, Lesbian Bisexual and Transgender, Muslim, etc…), and societal groups (Environmental groups fighting climate change, Labor Unions, Women’s Rights groups, etc…) to blame for everything from the lack of ability to pass policy to the need for him to make executive decisions without regard to consequence.  Whether we are looking at the decision to pull the US out of the Paris Accord to the latest ban on Transgenders serving in the Military, our President has been playing the “blame game” since coming on the scene during the campaign and has brought his hate-filled rhetoric to the Oval Office at heights not seen in this country since the days of Andrew Jackson.


Media co-optation (“Gleichschaltung”) proceeded in two steps in Nazi Germany: extending ideological command over the media where possible and shutting down those media outlets Hitler could not control. – Trump’s fight with the media is legendary; labeling any news source that disagrees with him “Fake News” and embracing only FOX News, which will agree with any absurd statement and/or policy that he puts in his twitter feed.  The state of media and the dissemination of thought is extremely different than that of 1933 Germany. However, the President’s use of Twitter has effectively shut down any opposition whatsoever…he simply tweets that the media is wrong, calling them “stupid, liberal, fake media” and proceeds to do whatever he wishes. In short, Donald Trump has no need to shut down any media that does not pander to his child-like whims; he has created his own media outlet to spew his brand of hate across the world wide web.


Paramilitary organizations were also part of the Nazi effort to boost national-majority cohesion. The “Sturmabteilung” (SA) violently attacked and intimidated adversaries, most notably on “Kristallnacht” in 1938, when they carried out large-scale attacks on Jews and political opponents. Thus far, the president-elect’s reaction to post-election racial violence and harassment has been a call to “stop it!” Trump rejected an endorsement from a KKK-linked newspaper before the election, but continued praise from former KKK leader David Duke leaves many Americans concerned about the potential for a rise in SA-type activities. Even more alarming would be any indication that the U.S. government would tolerate violence or racial intimidation from white supremacist groups. While the SA controlled the streets, the Hitler Youth indoctrinated young generations, and the government required all young Germans to participate in labor activities (such as road-building for the autobahn) from 1935 onward. – Since the election of the 45th President, the rise in Extremist groups making public appearances and acting out continues to increase. The Southern Poverty Law Center, the leading watchdog for monitoring hate, lists daily “Hatewatch Headlines” detailing the growth of hate, much of which being justified by the rhetoric and policy of the current administration of this country.  Today’s Hatewatch (July 26, 2017) points to FOX News’ Tucker Carlson partnering with the extremist “American College of Pediatricians” (intentionally meant to confuse people with the legitimate American Academy of Pediatrics) to spread misinformation on the effect that transgender “ideology” has on “normal” children. On any given day, the Administration utilizes its pet news media to prop up its hate-filled policies. Unfortunately, being reported by the SPLC does not garner headlines as it should, since the scope of the hate is growing at an exponential rate; due in large part to the utilization of social media by Mr. Trump and his policy-makers.  One only needs to point to Mr. Trump’s recent appearance at the Boy Scout Jamboree in West Virginia this past week to see how he is working his way into the youth psyche of this country, similar in methodology to Adolph Hitler’s pandering of the Hitler Youth, by showing an inordinate amount of interest in “protecting their future” and building a country where” it is safe for them to be an American”.


Emergency laws came about in Germany after the 1933 arson attack on the Reichstag (Germany’s parliament). Hitler used the threat of terrorism and foreign aggression to justify sweeping autocratic policies, including the 1933 Enabling Act (which let the government issue laws without the Reichstag). Similarly, the Reichstag Fire Decree in 1933 gave Hitler the power to suspend most Germans’ political and individual rights, effectively outlawing opposition parties. Changing the U.S. Constitution to abolish elections and remove freedom of speech is hardly imaginable. The United States has an uninterrupted democratic history, while Hitler was able to tap into nostalgia for the times under the last German Emperor.- Donald Trump has already, within his first seven months as President, developed an impressive list of  “Abuse of Powers”, ranging from the pressure on then-FBI Director James Comey to drop the investigation into ousted National Security Advisor Michael Flynn, the firing of Comey, the ongoing investigation into inappropriate meetings with Russian officials while a candidate for office, and his current investigation into the limits of Presidential pardons, preparing for the inevitable need to pardon Donald Trump Jr. as well as son-in-law Jared Kushner over their lack of transparency concerning the Russian situation(s). Not to mention (but I will…) the push for Senate Republicans to lower the number of votes needed to break a filibuster from 60 to 51, guaranteeing that Democrats could not block the nomination of Neil Gorsuch or any future Supreme Court nominee that would potentially come down the pike during the Trump Presidency.


Schutt closes with a warning, stating that people should, in effect, “keep their minds open, but also their eyes and ears.”  He continues: “Barring clear moves on any of these four scenarios, Trump could still commit to regrettable policies, but laying the building blocks of fascist rule would not be among them.”


I wonder how an article written by Schutt on this same topic would read today?

Dr. Casey J. Hayes is an Associate Professor at Franklin College, in Franklin, IN where he Chairs the Music Department and researches the music and musicians lost in the Holocaust. 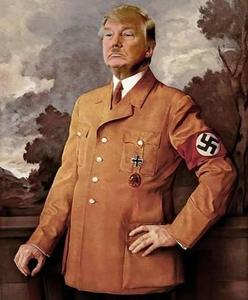